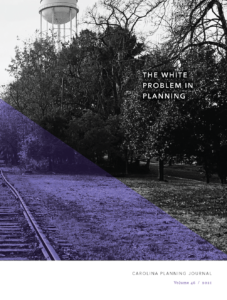 This past year has been in large part defined by three interrelated phenomena: a resurgence in Black Lives Matter protests and activism catalyzed by the murders of Breonna Taylor and George Floyd by the police; the spread of the COVID-19 pandemic; and the ouster of Donald Trump and the Republican Party from control of our federal executive and legislative branches of government. Each of these events has highlighted how the social, political, economic, legal, and physical institutions of our country have been designed and employed to benefit whites at the expense of Black, Indigenous, and People of Color (BIPOC) communities. In response, we asked authors to address issues raised by Goetz, Williams, and Damiano (2020) in their article titled Whiteness and Urban Planning, in particular how urban planning has worked to normalize and perpetuate whiteness–its invisibility, the exclusion by which it is defined, and the extractive nature of white affluence. The articles in this issue touch on many of the domains where planning intersects with whiteness, and they contribute valuable perspectives and analyses as we seek to build more racially just and reparative planning systems.

The roles of federal housing policy in building white advantage have been documented in an extensive body of literature. This literature also captures how federal housing policy has simultaneously excluded BIPOC groups from wealth-building opportunities and destroyed vibrant BIPOC communities. Frank Muraca (MCRP ‘20) builds on this work by examining the prevalence and impacts of “Urban” Renewal projects on rural communities in North Carolina, demonstrating the influence of federal Renewal dollars in creating and segregating white affluence. Rachel Eberhard (MCRP ‘16) examines contemporary efforts to mitigate housing discrimination, arguing that the Biden Administration has the opportunity to improve the Affirmatively Furthering Fair Housing (AFFH) rule, expand housing opportunities, and eliminate racial barriers to housing access.

In an article centered on Los Angeles, Jackson Loop examines sites central to the 1992 Uprising following the acquittal of Los Angeles Police Department officers who were recorded beating Rodney King, an unarmed Black man. Loop notes that historic preservation systematically privileges monumental buildings and landmarks and “enshrines whiteness” while neglecting spaces that are central to marginalized peoples’ histories of oppression and resistance. Davi daSilva employs case studies and an analysis of landmarked places to explore how procedural and structural aspects of historic preservation have privileged white historical narratives while erasing those of Black Cambridge residents.

Darien Williams (MCRP ‘18) situates recent efforts to reform the curricula, structures, and praxis of planning departments in the U.S. as part of a longer historical narrative dating back to the 1960s. Williams argues that Black students recognize the “magical” power of planning education, which offers the tools to translate ideas, beliefs, and biases into the built environment, and that these students seek to transform or provide alternatives to white imaginaries through Black magic. L. Dara Baldwin, Tamika L. Butler, Anita Cozart, and Veronica O. Davis, interviewed by Wesley Lowery, reflect on their experiences as Black women in the planning field to characterize how the “White Problem” manifests in planning: historical context, white-centered planning education, exclusionary language, and a lack of empathy around racism. They call for creating and cultivating Brave Spaces; confronting power and privilege that perpetuate inequities; ending institutionalized racism in the planning industry; and revising the planning curriculum to reflect the experience of BIPOC communities.

This year’s cover photo by Joungwon Kwon (DCRP PhD student) highlights the physicality of what Williams (see above) terms “white magic”. The enduring legacy of the railroad tracks in Durham, as elsewhere, is not merely one of transportation, but of both literal and figurative separation and segregation. The familiar phrase “the other side of the tracks” both pathologizes and literally “others” Black communities, while simultaneously normalizing and idealizing whiteness. By shifting the focus to the other, this language also makes invisible the white affluence and exclusion that implicitly define the “right” side of the tracks–affluence and exclusion enabled by the tracks themselves.